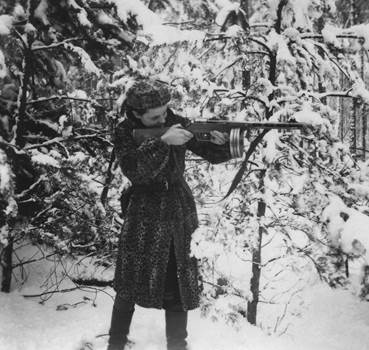 The lives of partisans depended on their ability to remain unseen, undocumented and unidentifiable. But one fighter, Faye Schulman, had a camera.

The only known Jewish partisan to capture the World War II experience on film, Schulman’s rare collection of images captures the camaraderie, horror and loss, bravery and triumph of the rag-tag, tough partisans – some Jewish, some not – who fought the Nazis and their collaborators.

Born in Poland in 1924, Faye Schulman received her first camera from her brother when she was 13. It was that camera which ultimately saved her life, and allowed her to later document partisan activity. Pictures of Resistance: The Wartime Photography of Jewish Partisan Faye Schulman poses probing questions about this incredible woman and the people whose images she documented.

What is a Partisan? A partisan is a “member of an organized body of fighters who attack or harass an enemy, especially within occupied territory,” and during World War II these groups destroyed railroad tracks, blew up fortifications, ambushed German-occupied towns, and disrupted communications in order to stop the invading Nazis.

Voices of Resistance: The United States, Social Movements, and the Role of Women
Thursday, April 11, 7:00 – 9:00 pm
Over the past two centuries, women have led different kinds of resistance movements, with differing political ends, from advocating for the abolition of slavery to advocating for the right to vote. Join Lilly Goren for an important exploration of women’s voices, their engagement, and their advocacy which has had significant impacts on the lives we all lead today.

Daring to Resist Film Screening and Talkback
Rubenstein Pavilion of Ovation Jewish Home
Tuesday, April 30, 7:00 – 8:30 pm
In this gripping documentary, three Jewish women recall their lives as teenagers in occupied Holland, Hungary and Poland, when they refused to remain passive as the Nazis rounded up local Jewish populations. Join scholar Amy Shapiro for a talkback to explore the significance of Faye Schulman’s unique form of resistance.

“Don’t Ever Say the End is Near and Hope is Gone:” Jewish Armed Resistance During the Holocaust
Wednesday, May 8, 11:45 am – 1:30 pm
Join us for a conversation on the heroism and perseverance of Jewish resistance fighters – in the ghettos, camps, in partisan units and in a variety of underground organizations – who chose to respond to the Nazi Final Solution plan by resorting to armed resistance.

Defiant Requiem Film Screening
Rubenstein Pavilion of Ovation Jewish Home
Tuesday, May 14, 7:00 – 8:30 pm
Defiant Requiem tells the remarkable story of Rafael Schächter, a brilliant young Czech conductor trapped at Terezín, who demonstrated moral leadership under brutal circumstances by sustaining hope and courage for his fellow prisoners by creating a prisoner choir and “singing to the Nazis what they dared not say.”